Traditional Southeast Asian ships were made from tropical hardwood, with a pointed bow, and outboard rudders on the sides. Early examples were of the technical tradition characterised as 'lashed-lug and stitched-plank'. In this tradition, ships are built by raising planks either side of a keel, the components being held together with stitchings and lashings of vegetable fibre. In lashed-lug technique, lugs protrude from the inner sides of the planks, with holes in the lugs for the lashings. In stitched-plank technique, fibres are passed through holes drilled at the edges of the planks. Stitching gradually gave way to the use of wooden dowels.(1,2)

Chinese ships were different. Chinese shipwrights used iron nails and iron clamps for joining, and temperate-climate softwoods such as pine. This type of construction is represented in the exhibition by the Turiang shipwreck. Although the remains of the Turiang include only the lowermost portion of the hull, the ship is believed to have featured a flat bow above the water line, a transom stern, and a single axial rudder. The hull was equipped with transverse bulkheads which divided the ship into separate cargo compartments. Marco Polo, who reported seeing saw such ships in the late 13th century, described them as follows:

These ships, you must know, are of fir timber. They have but one deck, though each of them contains some 50 or 60 cabins, wherein the merchants abide greatly at their ease, every man having one to himself. The ship hath but one rudder, but it hath four masts; and sometimes they have two additional masts, which they ship and unship at pleasure… Moreover the larger of their vessels have some thirteen [bulkhead] compartments or severances in the interior, made with planking strongly framed, in case mayhap the ship should spring a leak, either by running on a rock or by the blow of a hungry whale (as shall betide ofttimes, for when the ship in her course by night sends a ripple back alongside of the whale, the creature seeing the foam fancies there is something to eat afloat, and makes a rush forward, whereby it often shall stave in some part of the ship). In such case the water that enters the leak flows to the bilge, which is always kept clear; and the mariners having ascertained where the damage is, empty the cargo from that compartment into those adjoining, for the planking is so well fitted that the water cannot pass from one compartment to another. They then stop the leak and replace the lading… The fastenings are all of good iron nails and the sides are double, one plank laid over the other, and caulked outside and in... Each of their great ships requires at least 200 mariners (some of them 300). They are indeed of great size, for one ship shall carry 5000 or 6000 baskets of pepper (and they used formerly to be larger than they are now)…(3)

A half-century later, Ibn Battuta saw Chinese vessels along the Malabar Coast of India. He noted that this was the farthest they sailed to the west, whereas to the east 'on the Sea of China travelling is done in Chinese ships only'. His description is as follows:

The Chinese vessels are of three kinds; large ships called chunks, middle-sized ones called zaws [dhows] and small ones called kakams. The large ships have anything from twelve down to three sails, which are made of bamboo rods plaited like mats. A ship carries a complement of a thousand men, six hundred of whom are sailors and four hundred men-at-arms, including archers, men with shields and arbalists, who throw naphtha. These vessels are built only in the towns of Zaytun [Quanzhou] and Sin-Kalan [Guangzhou]. The vessel has four decks and contains rooms, cabins, and saloons for merchants; a cabin has chambers and a lavatory, and can be locked by its occupant, who takes along with him slave girls and wives. Often a man will live in his cabin unknown to any of the others on board until they meet on reaching some town... Some of the Chinese own large numbers of ships on which their factors are sent to foreign countries. There is no people in the world wealthier than the Chinese.(4)

Sometime in the late 13th century (perhaps as a result of Kublai Khan's thousand-ship raid on Java in 1293(5)), Southeast Asian shipbuilders adopted the Chinese feature of transverse bulkheads. However, excavated vessels show that planking continued to be joined by wooden dowels rather than by iron bolts or nails. 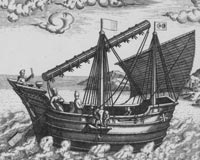 Maritime archaeology has revealed a hybrid 'South China Sea' tradition, previously unknown. These vessels are built from tropical hardwood joined by wooden dowels, but with supplementary use of iron nails to fasten the transverse bulkheads to frames at the hull. This type of vessel, combining hardwood with Chinese construction details, may be a result of the Ming ban against private overseas trade from China. Although emigrants and traders exchanged ideas earlier, ships of this type have not yet been found prior to 1371 when the Ming ban became effective. It is possible that displaced Chinese merchants who moved to Southeast Asia at that stage may have been the first to order ships built in this manner.

Adapted from the book 'Maritime Archaeology and Shipwreck Ceramics in Malaysia', by Roxanna M. Brown & Sten Sjostrand, published by the Department of Museums & Antiquities, Kuala Lumpur, and available from Muzium Negara.