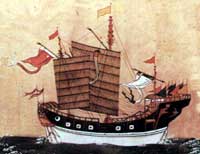 The Chinese and Arabs shipped ceramics across the South China Sea as early as the 9th century. Chinese oceangoing 'junks' were designed differently from Southeast Asian vessels. Chinese ships carried two or more masts, and were commonly around thirty metres in length. They were built from temperate-climate wood, joined by iron nails. Southeast Asian ships were built from tropical hardwood and were joined by wooden dowels. Portuguese arrivals in Malacca in 1509 reported that Malay ships were very large and capable of navigating as far as east Africa.

By the 12th century, enormous quantities of Chinese green-glazed ceramics (celadon) were exported to the Middle East, India and throughout Southeast Asia. At the beginning of the Ming dynasty (1368-1644), when the Chinese emperor prohibited overseas trade, Chinese potters moved to Thailand and resumed production.

Between the 14th and 16th centuries, Southeast Asian countries made and shipped the largest volumes of ceramics traded on the South China Sea. The earliest Southeast Asian exporters were Thailand and Vietnam. They traded frequently with Japan, the Philippines, Borneo and the Indonesian archipelago.

Asian markets predominated, despite some trade with the Middle East, until the early 17th century when Europeans started to ship large volumes of Chinese blue-and-white porcelain to Europe.