These celadon jarlets are all from the Royal Nanhai. They have been immersed in salt water for the same length of time, in the same environment, but show very different 'survival' grades. This is probably due to different firing temperatures. If the iron oxide in the glaze matrix is not fully dissolved by a sufficiently high firing temperature, it will crystallize on the surface. Once in contact with salt water it will corrode, pit the surface, and then slowly damage the entire surface. The jar on the left was well-fired. The two right-hand examples have both deteriorated, except in one patch which was protected by seashells. 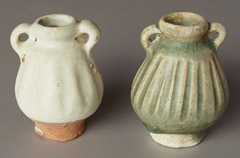 To achieve a green celadon glaze from the original whitish clay matrix, the kiln atmosphere has to be reduced, by shutting off oxygen at a precise moment in the firing cycle. These jarlets are also from the Royal Nanhai. One was subject to the correct reduction atmosphere and turned celadon-green. The other was incorrectly fired, with inadequate or late reduction, and maintained its original clay colour. 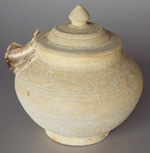 Ceramics with lids were often joined with small glaze droplets during manufacturing. This prevented misplacement during packing and transport. Tapping the joint with a sharp object easily separates body and lid. This jar from the Royal Nanhai remains unopened, after five centuries.